From its beginnings in a bowling alley to its current status as one of the best science museums in the country, the Montshire Museum has nurtured an interest in the natural and physical world for nearly a million visitors and schoolchildren in New Hampshire and Vermont.

After Dartmouth College’s natural history museum closed in the early 1970s, a group of area educators persuaded the college to donate specimens and other resources in support of a new community science center. The organization was incorporated in 1974, taking its name from the last syllables of the two states whose communities it would serve: VerMONT and New HampSHIRE.

The Montshire Museum’s first home was a former bowling alley. The “new” Montshire opened 15 years later, and has continued to add to its facilities, including the outdoor and water exhibits in Science Park in 2002, and the Hughes Pavilion in 2010.

The Montshire is now one of the busiest museums in northern New England, typically attracting more than 150,000 visitors annually. The Museum’s school programs also reach more than 20,000 schoolchildren in New Hampshire and Vermont.

The Museum has been the recipient of numerous grants from NASA, the National Science Foundation, the National Institutes of Health, and other science and education foundations. In recent years, the Museum has partnered with the Cornell Lab of Ornithology and Vermont Center for Ecostudies and with ILEAD (Institute for Lifelong Learning at Dartmouth). The college and the museum have also created the Dartmouth-Montshire Institute for Science Education.

Spearheaded by Dr. Robert Chaffee, former Museum Director of the Dartmouth College Museum, research begins in the Upper Valley to discuss the implications of having a regional environmental center in the Hanover-Norwich area.

A full proposal for a bi-state regional educational center is developed by Robert Chaffee and Walter C. Paine, and presented to various community audiences.

The Montshire Museum of Science is founded. The name “Montshire” is derived from the last syllables of Vermont and New Hampshire, and stands for the Museum’s focus on the communities it serves.

The Montshire Museum opens its doors to the public in the former Golfside Bowling Lanes on Lyme Road in Hanover, New Hampshire, with six diorama cases and a Discovery Room with simple interactive exhibits (January 10).

On this date, the Trustees of Dartmouth College sign over the collection of biological and geological collections to the new Montshire. The Museum opens with 60,000 natural science specimens, and acquires over 600 in the following year.

The Montshire becomes the first organization in the country to be named a Public Service Science Center by Montshire.

Montshire hires David Goudy as director. Goudy previously served as the assistant director of the Missouri Botanical Garden in St. Louis Missouri, and starts his tenure on August 1, 1981.

Supported by a community fundraising campaign, the Montshire purchases 100 acres along the Connecticut River in Norwich, Vermont, from the Co-op Food Stores.

The Corporate Fund, a project of the New Hampshire Charitable Foundation, recognizes the Montshire with its first Award for Excellence in Non-Profit Management.

The Museum acquires a StarLab portable planetarium system and adds an astronomy-based curriculum to the Museum’s outreach program for schools throughout New Hampshire and Vermont.

The Board of Trustees adopts the mission statement: “The purpose of the Montshire Museum is to create, awaken, foster, and nurture an interest in and curiosity about the physical and natural world by providing programs, experiences, and exhibits emphasizing real objects and phenomena.”

Andy’s Place opens, providing an area designed specifically for children 5 years of age and under.

Montshire is awarded a National Science Foundation grant for “Model Projects for Women and Girls in Science and Mathematics: Science Horizons”, to develop and implement a program to engage girls in science and provide women scientist role models through a collaboration with the Dartmouth College “Women in Science” Program.

Montshire is awarded a U.S. Department of Energy grant for Energy Circus, enabling the Museum to develop an electricity exhibit section for Science Circus, the Museum’s science outreach program, and Pushcart Science, a portable workspace for Museum staff to lead energy, electricity, and science activities in outdoor environments at the Museum and in the community.

Montshire Museum and Dartmouth College create ValleyNet, a community-based information resource for the Upper Connecticut River Valley region of New Hampshire and Vermont, which later grows into its own independent organization.

The 196-foot long pedestrian bridge is built, connecting the Museum building to the Ridge Trail, and making a connection between the indoor natural history exhibits of northern New England and the outdoors.

The Institute of Museum and Library Services awards the Montshire the National Award for Museum Service, presented by First Lady Hillary Clinton at a White House ceremony.

The first of three National Science Foundation grants is awarded to the Montshire, creating the TEAMS (Traveling Exhibits at Museums of Science) collaborative with six museum partners around the country. The funding supports innovative research about how families learn in museums.

The Montshire developed and designed exhibition, AirPlay, opens—part of the TEAMS collaborative project funded by the National Science Foundation.

Pedestrian access through a tunnel under the railroad tracks is completed, allowing visitors access to the Quinn Nature Preserve and riverfront trails.

Dartmouth provost Barry Scherr and Montshire director David Goudy announce the creation of the Dartmouth-Montshire Institute for Science Education to enhance the quality of science education in Vermont and New Hampshire.

Two-acre Science Park opens, the result of a $4.2 million capital campaign by the Museum.

The Montshire-designed and developed exhibition, Hear Here opens—part of the TEAMS collaborative project funded by the National Science Foundation.

Ground is broken for the Montshire Access Project. This $1.9 million project (completed in 2006) provides improved visitor access to the Museum building, and a paved access road and parking lot (June 10).

Jesse B. Cox Charitable Trust funds development of a model for museum-school partnerships to create a long-term, sustainable science infrastructure in a rural school district.

Science in the Stacks exhibits open in seven regional libraries—funded by IMLS.

Landscape Architecture magazine celebrates the unique design attributes of Science Park with a feature article and photo spread in its October issue.

Montshire’s TOYS: The Inside Story exhibition opens—part of the TEAMS collaborative project funded by the National Science Foundation.

Parents Magazine recognizes the Montshire as one of the nation’s top 25 science centers in its September issue.

Montshire forms partnerships with Cornell Lab of Ornithology and Vermont Center for Ecostudies to enhance and expand programming, and to offer new opportunities to explore nature.

Montshire receives a NASA grant to fund “The Dynamic Earth: You Have to See It to Believe It!”, a five-year project to develop Earth Science exhibits and programs.

Montshire receives a grant from National Institutes of Health to fund the Museum’s new outreach initiative, “Connecting Classrooms and Community with Health Sciences,” a multi-faceted project to develop health science curriculum for middle schools in Vermont and New Hampshire.

Montshire is recognized as 2009 Business Innovator of the Year by the Hanover Area Chamber of Commerce.

Montshire partners with ILEAD (Institute for Lifelong Learning at Dartmouth) to increase the number of science courses offered in the Upper Valley.

The 2,400-square-foot Hughes Pavilion, an architecturally unique, tensile membrane structure, is constructed on the northwest corner of Science Park.

Montshire and Frog Hollow, the Vermont State Craft Center, form a collaboration to involve Vermont artists in the creation of benches for the Museum’s Woodland Garden.

Montshire’s Associate Director & Director of Education Greg DeFrances is one of 18 museum leaders selected as a Noyce Fellow by the Noyce Leadership Institute.

Montshire ranks #4 of Top Ten Science and Technology Museums in the country (Trekaroo.com).

Board of Trustees revise the mission statement to, “Montshire Museum’s mission is to awaken and encourage a lifelong interest in science through exhibits and programming dedicated to hands-on discovery and education for people of all ages. Unique to this mission is Montshire’s 100-acre New England riverfront setting, which fosters deep and creative learning in both the physical and natural sciences.”

Montshire’s Associate Director & Director of Development Jennifer Rickards is one of 17 museum leaders selected as a Noyce Fellow by the Noyce Leadership Institute.

Montshire introduces the Warm Welcome program to ensure that the meaningful experiences offered by the Museum are accessible to disadvantaged children and families.

The Museum’s first floor is renovated to add additional space for exhibitions and to serve visitors.

The Botanical Investigations exhibition opens—created in partnership with NEWFS and funded by the National Science Foundation.

Friends of the Montshire contribute over $1 million to establish the David Goudy Discovery Fund to create new and enhanced exhibit experiences at the Museum from 2015 to 2020. The exhibition Bubbles: Science in Soap is the first exhibition supported by the Fund.

The Light Around Us exhibition opens—funded by the National Institutes of Health.

Executive Director David Goudy retires after 34 years of service on March 31, 2015. The Montshire hires Dr. Marcos Stafne as Executive Director. Stafne previously served as the Vice President of Programs for the Brooklyn Children’s Museum and various other science and arts institutions. He begins his tenure on April 15, 2015.

The Montshire celebrates its 40th Anniversary with a community day free to the public (January 10).

The Montshire continues to advance its mission to awaken and encourage a lifelong interest in science through exhibits and programming dedicated to hands-on discovery and education for people of all ages.

Montshire Museum’s mission is to awaken and encourage a lifelong interest in science through exhibits and programming dedicated to hands-on discovery and education for people of all ages. Unique to this mission is Montshire’s 100-acre New England riverfront setting, which fosters deep and creative learning in both the physical and natural sciences. 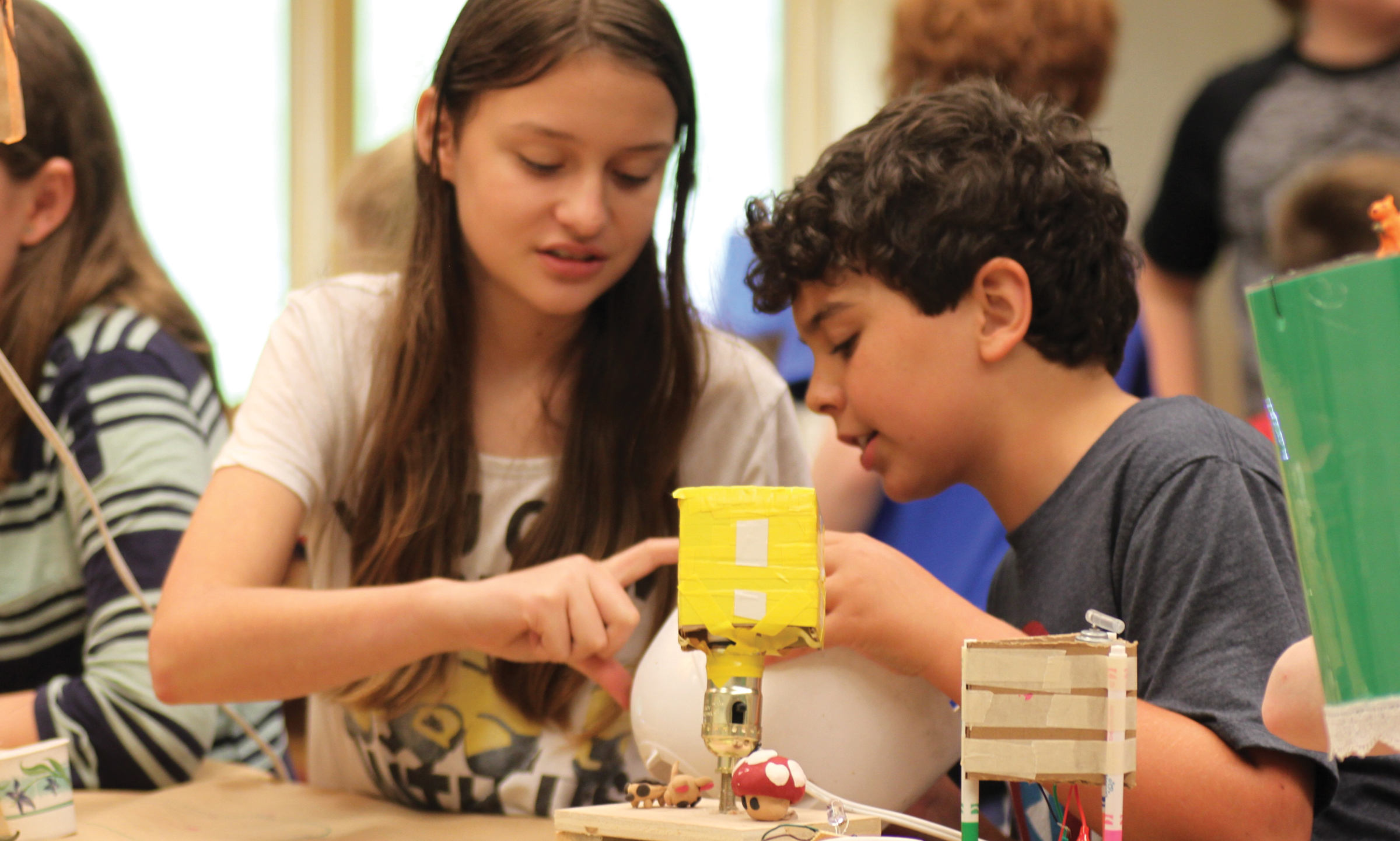